Let’s hear it for our Audiologists: Linty McDonald's story 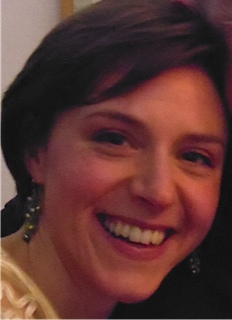 To celebrate Hearing Awareness Week (23 – 29 August) we caught up with Canberra-based Audiologist, Elise (Linty) McDonald, to hear about her experiences working in remote locations across the Northern Territory.

Since 2014, Linty has completed two placements with us and next month, she will be returning to the Northern Territory and working in Central Australia.

How did you get into Audiology?

Whilst playing the harp at my grandfather’s passing, I realised the profound effect that music can have and that got me intrigued about hearing. By 2010, I had enrolled to complete a Masters of Audiology through the University of Melbourne.

Currently I work for the Shepherd Centre, whose primary focus is on paediatrics and cochlear implants. Prior to this, I worked at Brindabella Hearing and Speech Centre for three-and-a-half years where I completed my clinical internship and then continued to consolidate my practical applications of audiology.

What made you want to work in the remote Indigenous communities?

During my first year of study, I organised to do my clinical placement in Darwin as I had heard encouraging stories from people that had been out to remote communities. It was a fantastic experience and gave an opportunity to see that different side of Australian life. As I grew up overseas and returning at 19, I released that I didn’t know much about Aboriginal people.

It was on this placement where I believe I first heard about Remote Area Health Corps (RAHC), and after that first experience, it was very encouraging to know I could return. I finally got to join RAHC at the end of last year which was fantastic as I had wanted to do it for so long and it was a great way to get into working remotely once more.

Did you have any concerns before you embarked on your placement?

I didn’t have any concerns but I was nervous that I didn’t have a wide scope of knowledge about indigenous culture.  Prior to travelling to the first community of my first placement I attended RAHC’s Cultural Orientation program run by an Aboriginal Elder.

He provided me with a one-on-one session about Indigenous culture and I found myself wanting to absorb all of the knowledge that he imparted to me. After the orientation I felt a lot more confident and found that once I got to the community I started to ease away from the nervousness by putting myself in different environments and being prepared to let others guide me. Generally, I found that if I was open and honest others were more than happy to share their knowledge with me and appreciate that I had an interest in learning about Indigenous culture.

What was your first impression of the remote communities like?

When we arrived at Maningrida, the first community of the placement, we weren’t sure of where we were going so we went on this big jaunt around the countryside. As I was fully prepared for things not to go 100% smoothly and I actually found that fun because it was an adventure and that is the nature of the gig whilst working remote.

The working environment was comfortable as the air conditioning was working and the old shipping containers that have been converted to become the hearing booths seemed quite easy to operate. Whilst it was obvious that it hadn’t be used in a while, as I believe it was about three months since the last visiting team, the booths had been recently calibrated which was great.

The hearing booths were set up to conduct Visual Reinforced Audiometry (aimed at toddlers), Play Audiometry (three to five year olds) and adult tests. It was quite easy to transfer my established skills from home through to this aspect of the work as the tests were the same. With each of the placements I’ve been on we have seen quite a large number of children. It was unpredictable but they would often come in waves, sometimes six children waiting to be seen and other times none.

Were you by yourself on your placement or a part of a team?

I was accompanied by a Department of Health (DoH) Audiologist, an ENT nurse and a translator. The teamwork aspect was highly involved as well as administering the medication. The the nurse would often play with the children to distract them, whilst we conducted the testing, ear washes or ear swabs. It was really helpful to have the additional clinical support so we were able to discuss each case.

Was the information that you required to conduct your testing readily available?

The laptops supplied provided access to the patient’s previous hearing tests and files which you were able to get a comprehensive history through. On the Neurotology trips with the ENT nurse, the information supplied was quite comprehensive as you uploaded each photo of the tympanic membrane where it would link to their file.

Were there aspects that you found that there was a large disparity between urban-based and remote community cases?

Their hearing results were a lot worse as there is such a wide range of cases of Otitis Media and other infections presented.

Back at home, if a child has an ear infection, most families immediately want their children to have grommets put in. However out bush, a bub might have an ear infection for two years and still not get the grommets. It’s not necessarily because parents say no or not want them to. They may not know they have an ear infection, they might not move their way up the list of who needs operations, it might get cancelled or they might go out bush when they’re scheduled and miss the plane.

What are some of the challenges that you’ve faced whilst on placement?

Communicating effectively is a challenge because it can be difficult to know who and how to address the very limited exchange of information to, especially when you are presented with a whole family who don’t speak any English. When it comes to the delivery of the information to patients and their families you can draw upon other’s experiences, the resources available in the booths and your own innovation to ensure they understand what is being explained

One clinical aspect which was challenging was the amount of pathology present including scabies. I found it positive that the nurse was able to provide further support by prescribing medication.

Has your experience working in the Northern Territory changed your perception at all?

Yes. I really had no concept about how isolated some of the communities are. After my first placement I now feel very passionate about how important it is for all communities to have access to healthcare or have healthcare go to them. It is a fundamental human right and matter of equity in this country.

It makes you not only appreciate about what you have but opens your eyes to what we have as a nation such as access to fresh fruit and vegetables and healthcare. But in these communities there’re not there as an everyday commodity, they are a luxury.

Before I went on placement I would watch a doco about it and think that it’s “so exciting, so foreign and so adventurous” to go there. When you’re there you realise that life is really tough for a lot of people.

Was there any aspects of working and living remotely that differed from living back in Canberra?

During my first placement when we stayed outside of the community, we found ourselves with no internet or phone coverage. However, in the actual communities, we had internet and phone coverage.

Whilst I found that fantastic, we were really cut off from our lives back home. This could be a challenge for many urban dwellers because they are attached to technology and so used to having it at hand.

Would you ever be interested in going remote permanently?

Yes, absolutely, and I certainly have the aspiration to do so. My partner finishes his medicine degree this year and later on in life we hope to work remotely together.